A few days ago I spent the whole day in what will become my local village. 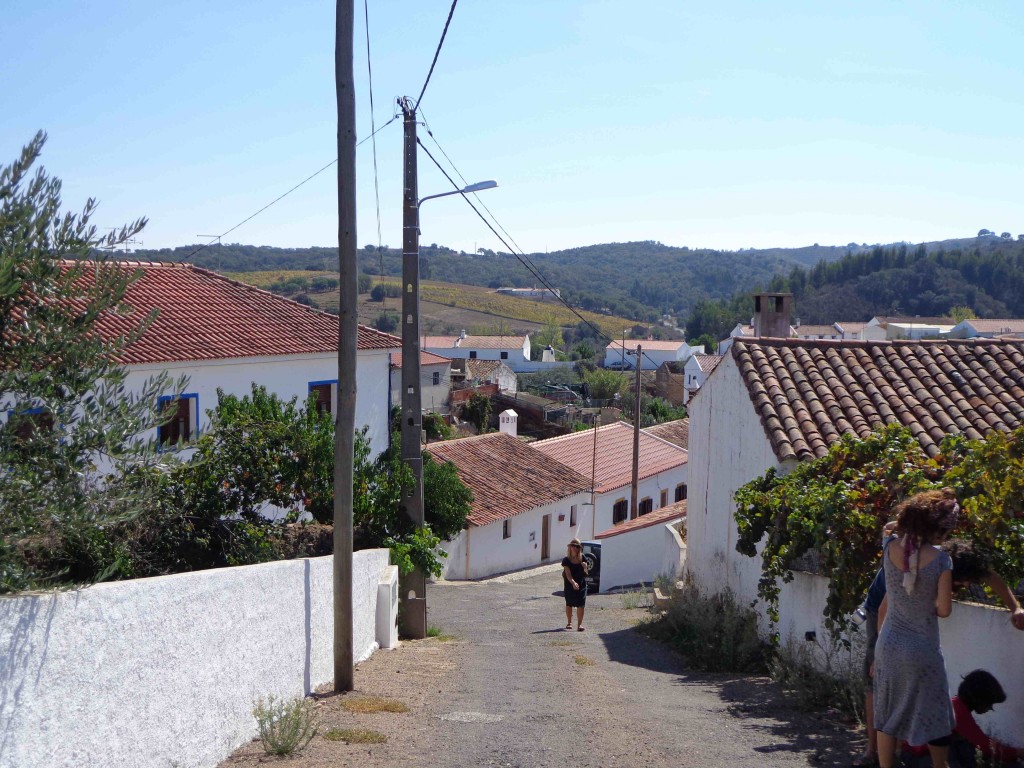 Since 2006 there has been a  project ongoing here, called Centro de Convergência (Convergence Centre), initiated by GAIA a portuguese environmental NGO. They describe the project as follows:

“Centro de Convergência is, above all, a unique working methodology aimed at bringing dynamics to a rural area, by hosting projects from different fields (environment, sociology, art and culture, research, permaculture…). While sharing a common space, people from different backgrounds can create new ideas, concepts and solutions. All projects have a strong relation with local population.”

Like many villages in the Alentejo and rural Portugal as a whole, this small community of about 200 people, was suffering from overgrazed lands, poverty and unemployment, and hence experiencing severe depopulation, with the remaining inhabitants mostly elderly. The whole of south Portugal is also threatened with desertification due to overgrazing, deforestation, eucalyptus plantations, and water mismanagement.

One of the biggest challenges of this project to create a “sustainable village”, one that can once again thrive and support the livelihoods of its residents, was to open up communication with its residents, and gain their trust and willingness to collaborate in transforming the village for the better. This was a gradual process. Here things move slowly and people tend to be very stuck in their ways.  So the young people from the CdC went around to each street and asked everyone what the “village of their dreams” would be like, and what they really wanted for their village.  This process is documented in the two videos below, (with English subtitles). These videos also give a good impression of the place and its people.  (Unfortunately I can’t seem be able to  to embed the vids):

Aldeia De Sonho with subtitles from centrodeconvergencia on Vimeo.

Aldeia De Sonho, part 2 with subtitles from centrodeconvergencia on Vimeo.

I feel fortunate to be locating myself near to such a village, where there is a hub for exchange and sharing of ideas, and a living culture that is attracting more people to come and live there. So I was excited to join an introduction to the project and tour of the village from two of the members of the Centro de Convergência.

This was a great opportunity for me to find out more about the place. I discovered some of its hidden treasures, and also some of the more challenging aspects of this community and its ways.

A group of us met at one of the two cafes in the village on a hot October Sunday and set off for the tour. 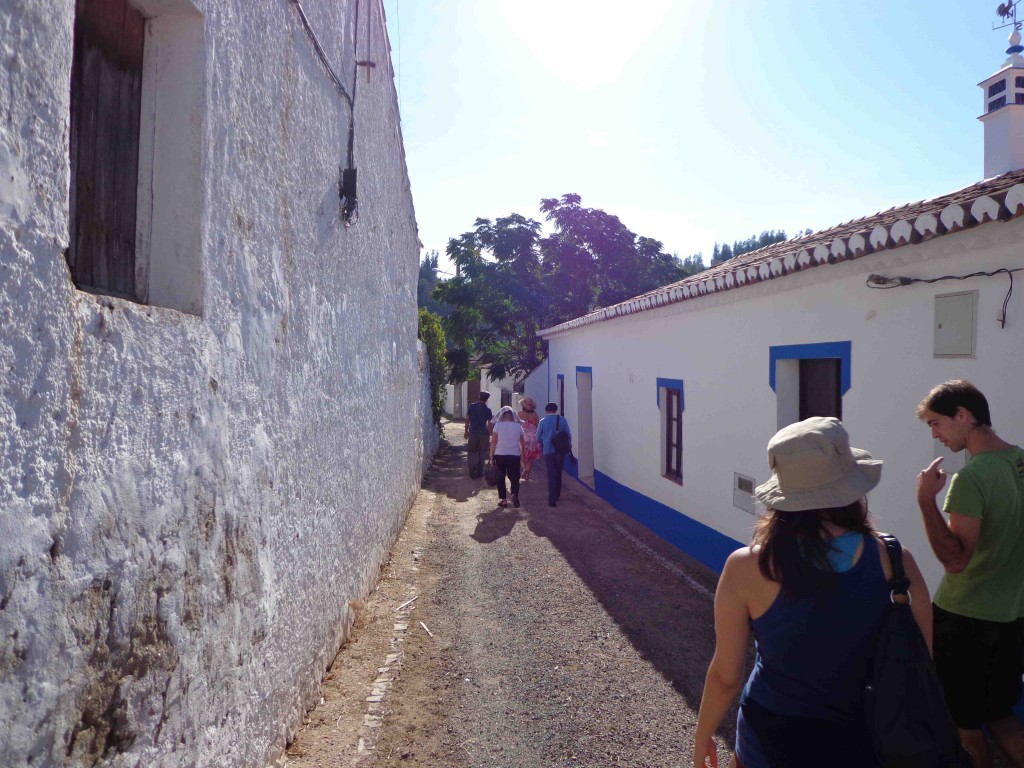 This is the oldest part of the village, and one of its focal points: 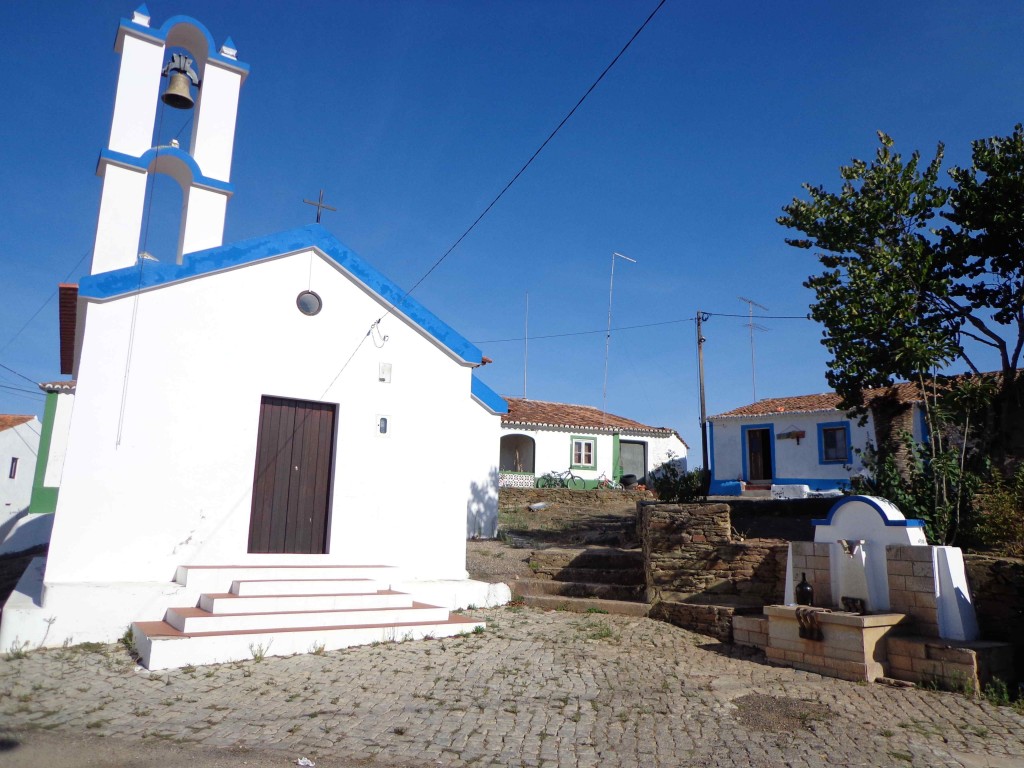 Here they are planning to locate a small children’s playground: 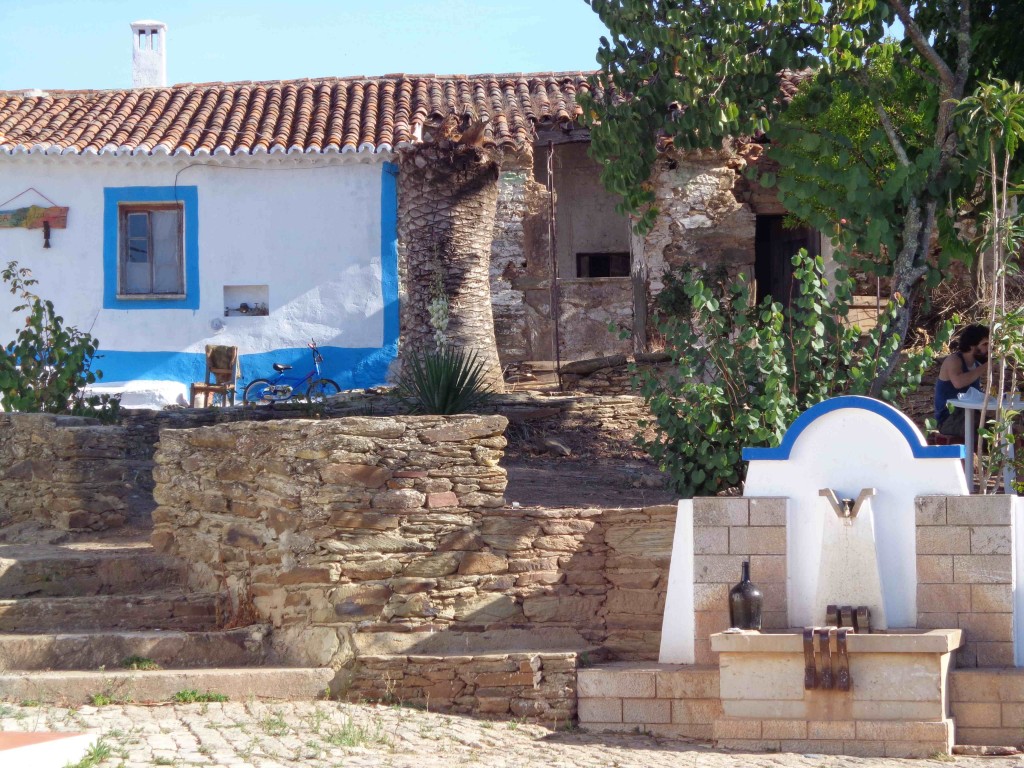 This is also the area where the wealthier people used to live, and there are several big old houses. The one below is called “The Queen’s House” as it is where the queen of Portugal used to stop for the night on her way from Lisbon to the spa of Monchique. (Its also for sale, so if anyone feels like moving to this village, let me know and I’ll pass on the details to you!) 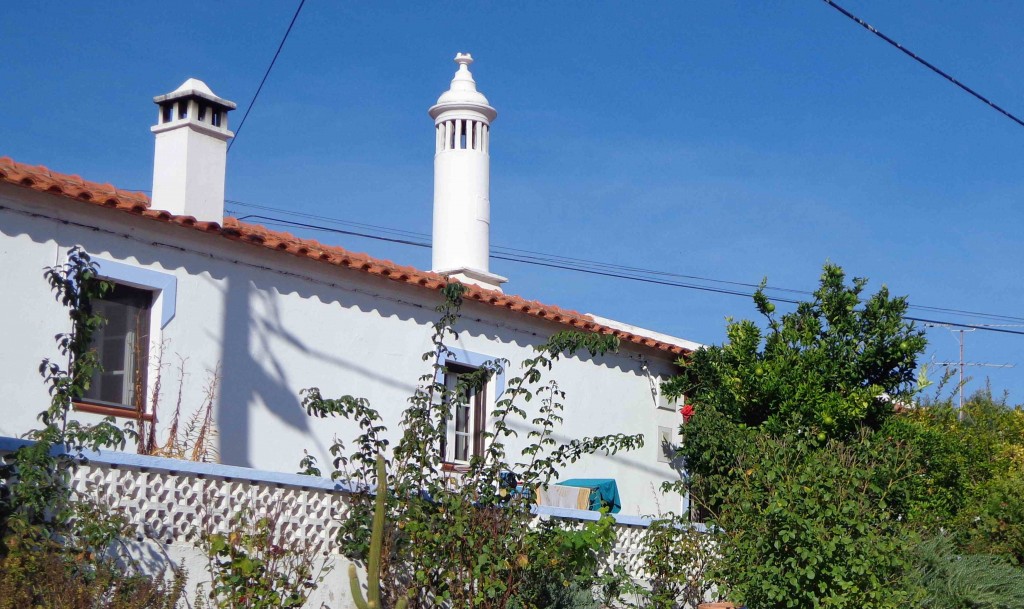 Below are some stacks of cork, recently harvested and ready to be sold: 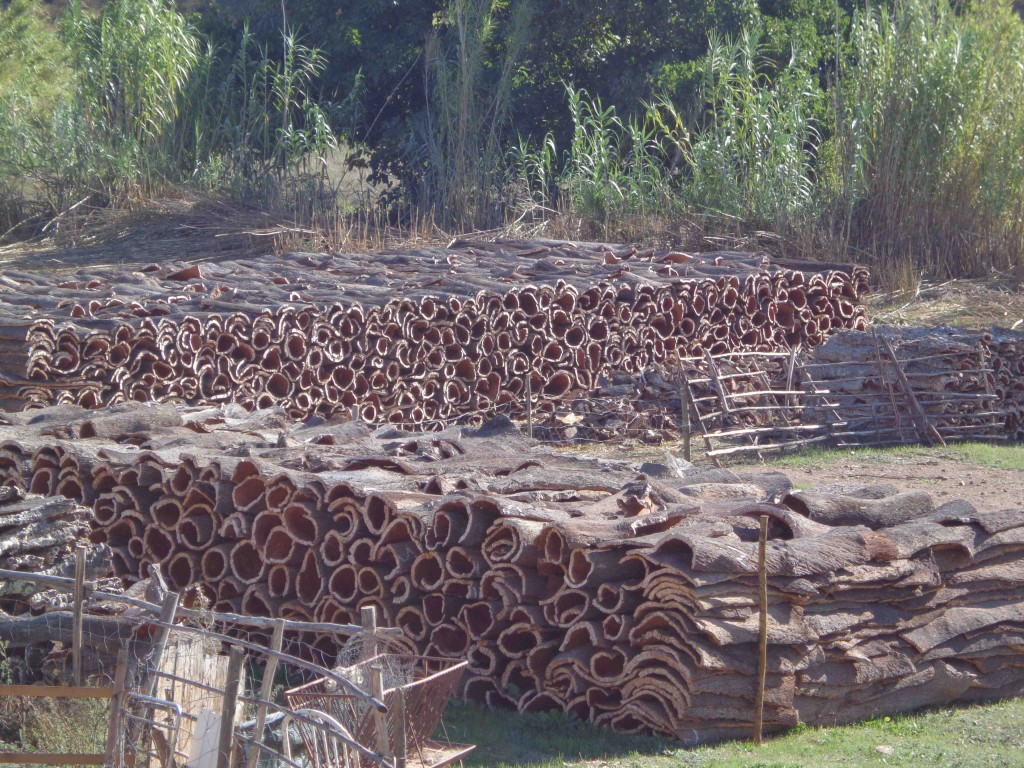 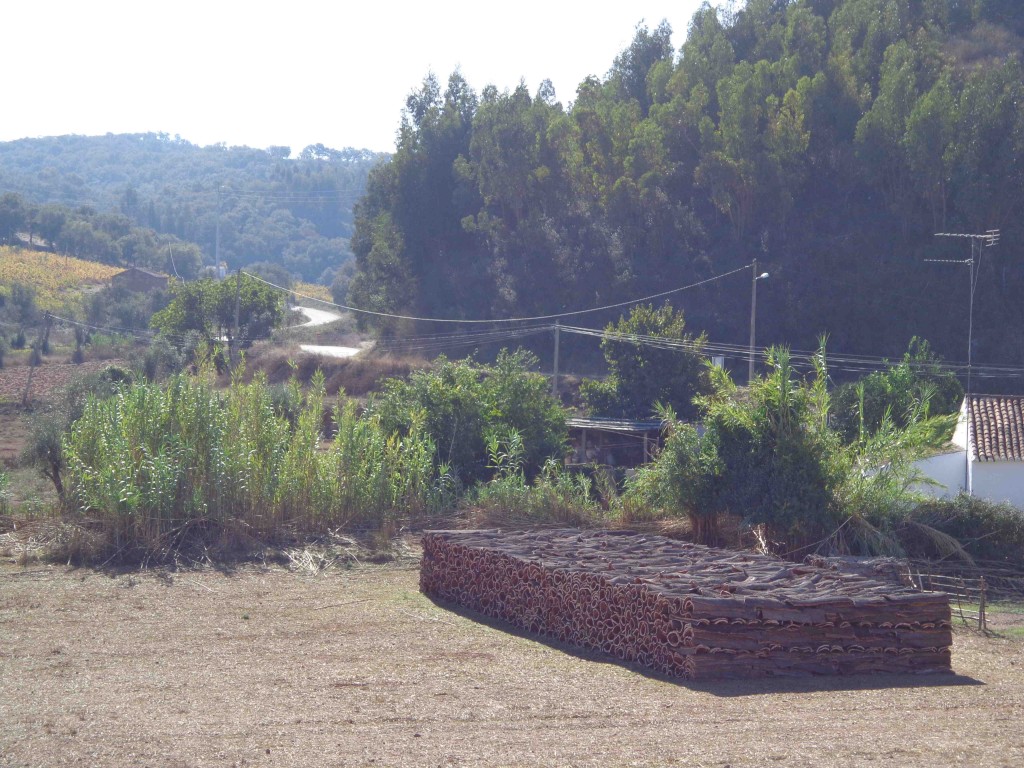 Cork is one of the main products of the area. (Portugal produces half of the world supply of cork). Other things are eucalyptus wood for the paper-pulp industry, honey, goat cheese, medronho (local liquor from a small fruit that grows on trees), pork. The men also like to go hunting, for birds and for wild boar.

There are also a lot of olive trees, and the olives can be harvested for olive oil. However the the price for olives is very low, and picking them is labour intensive, so it is a lot of work for very little money. Its impossible to compete with the large industrialised olive farms.

Olives are part of the local culture though, as portrayed in this series of frescoes, in the old public laundry building. These frescoes were done as a project of Centro de Convergência, involving the local community. The pictures illustrate a popular local poem, and celebrate the local traditions and history.

Its beautiful thing to discover this hidden in this small village. 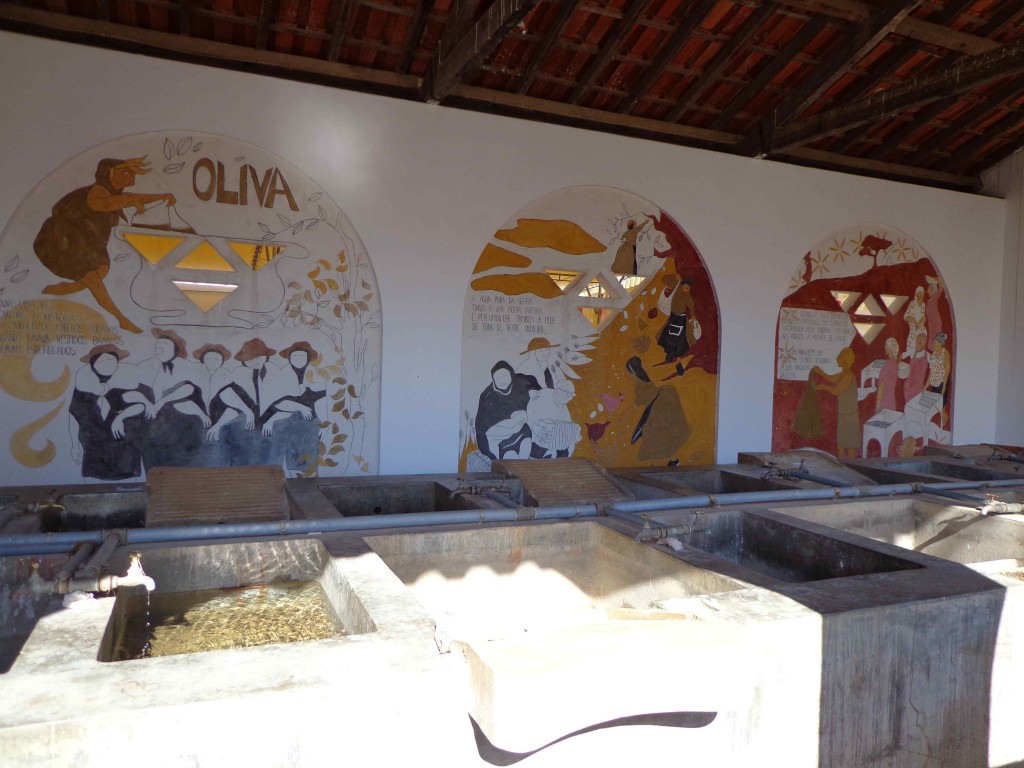 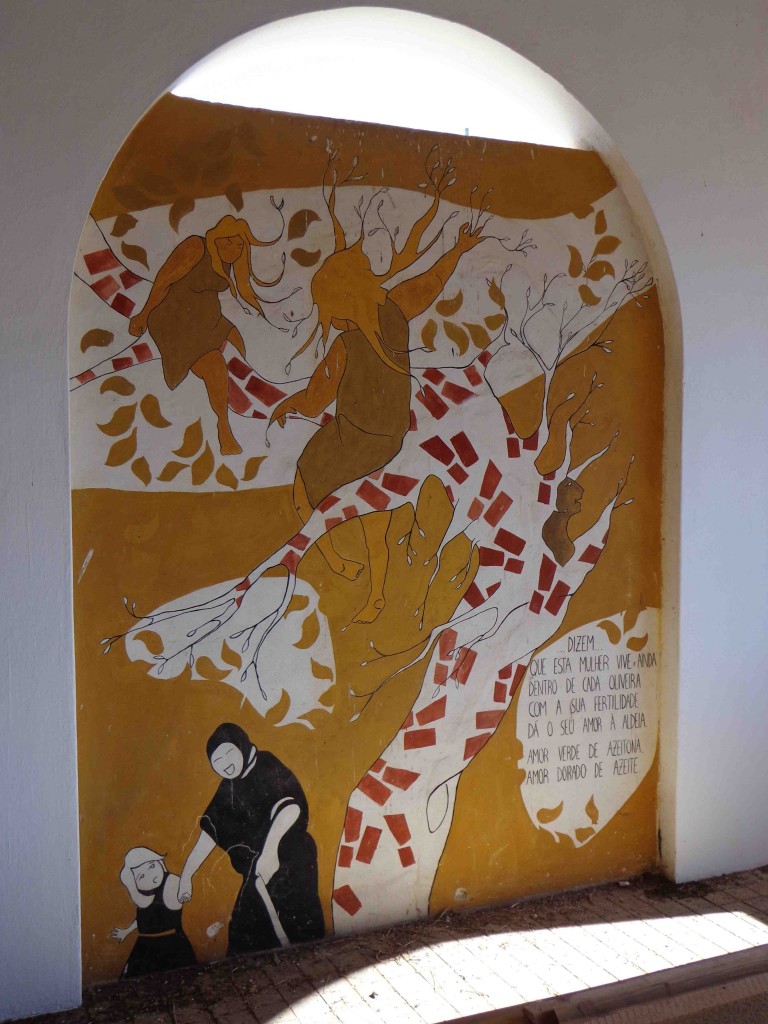 And there is more artwork here, a mural done as a collaboration between volunteers, local people and children. Made from photos of the village projected onto the wall and then painted. With the children adding in pictures of all the local animals: 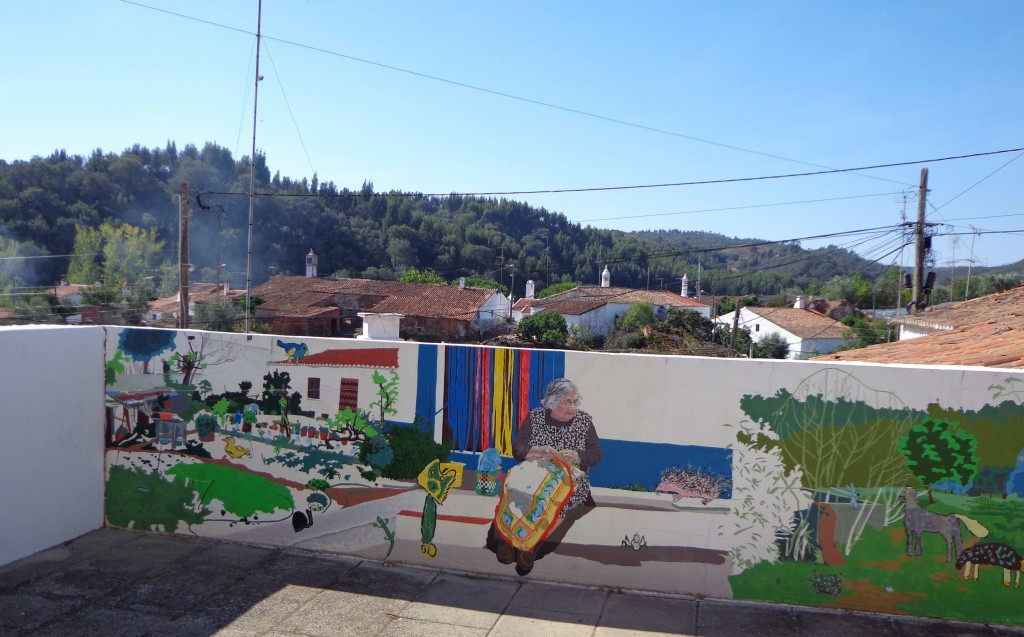 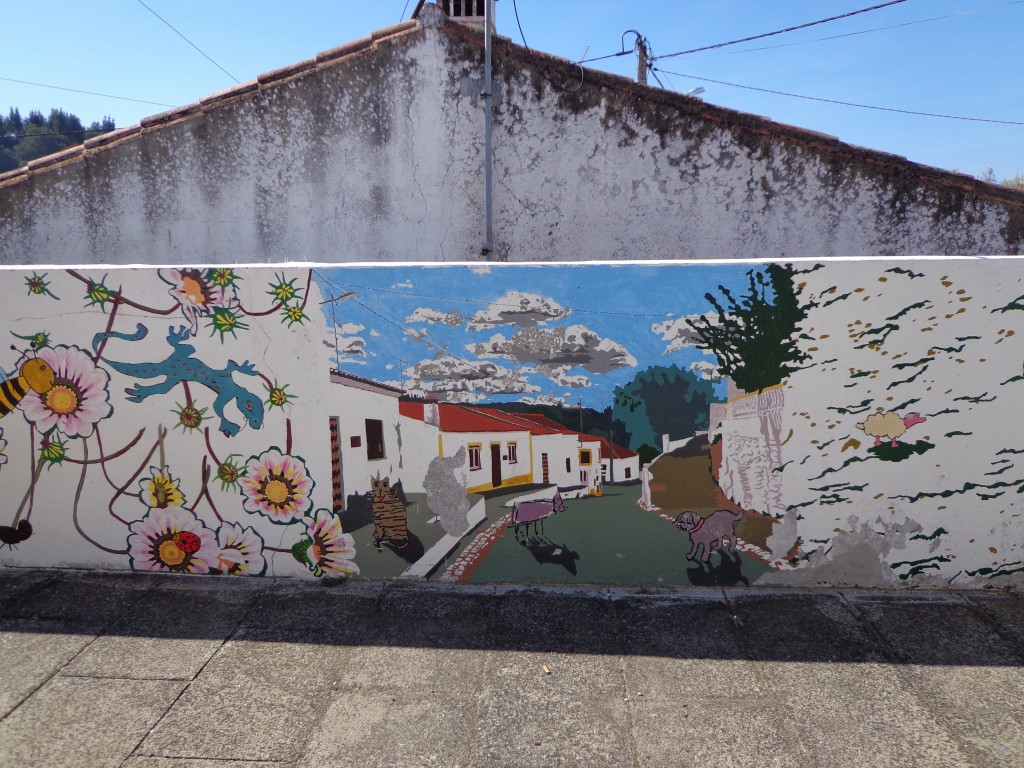 We also walked to the edge of the village to the fields alongside the stream, the zone for growing food. Here is an old well with a animal-powered pump for irrigating the fields: 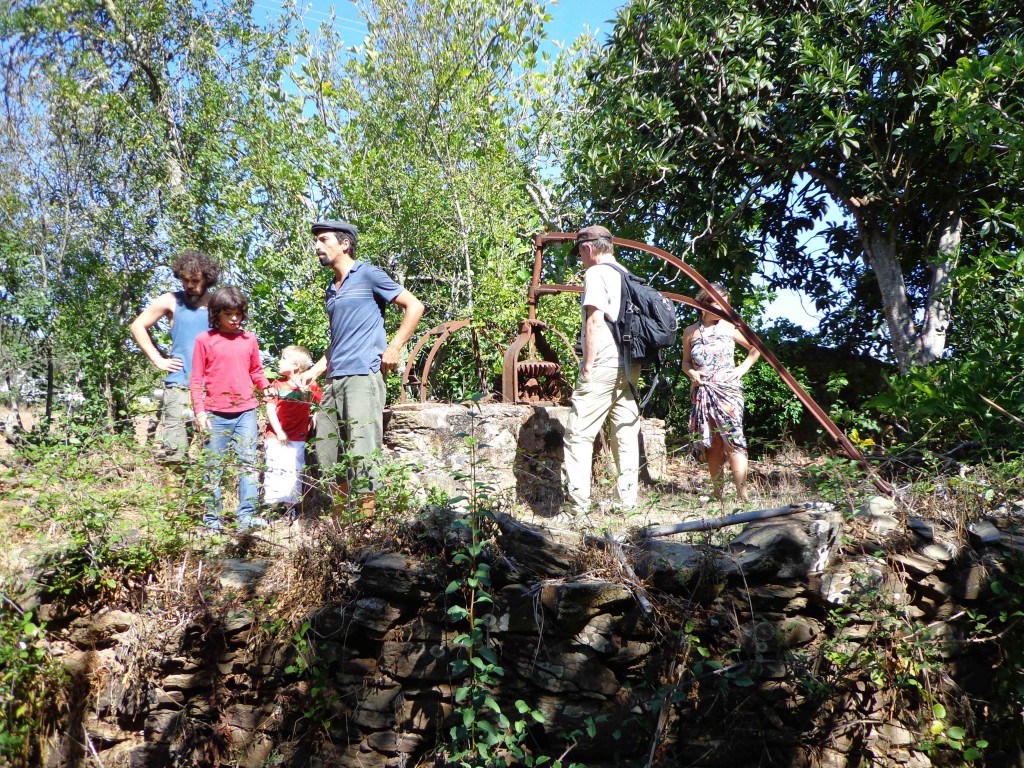 After lunch we convened again in the cafe. Being Sunday, it was lively and full of people. There was a big group of men back from hunting hanging out on the terrace, families sitting down to big plates of steaming food, old couples, children running in and out,  and our group of visitors watching the videos of the project on the big TV screen.  Sitting in there I begun to feel absorbed into this village life, its sounds and rhythms. The vivid intensity of a close-knit community rooted in its place on the earth.

Then we went to visit the “horta” (vegetable garden) of one of the village residents. This man doesn’t earn anything, but manages to feed himself and his family from his small plot. At first glance it seems to be a great system, a mixture of fruit and nut trees, vegetables, corn,  with grains in the winter. However I found out that it is not all that it seems……. 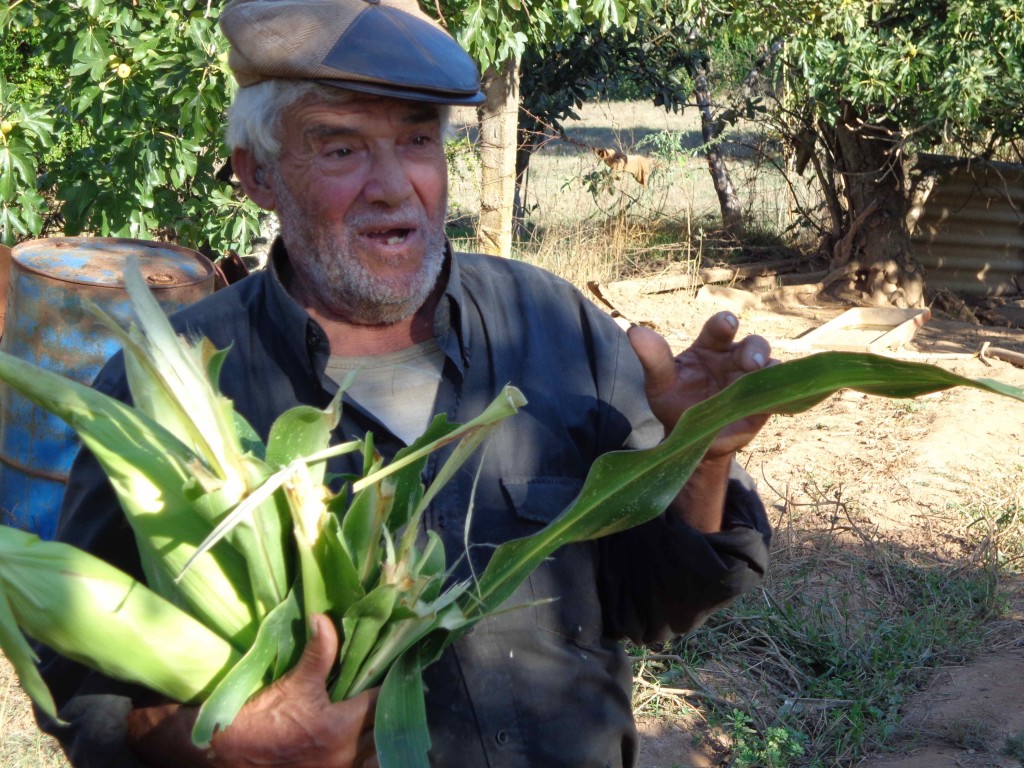 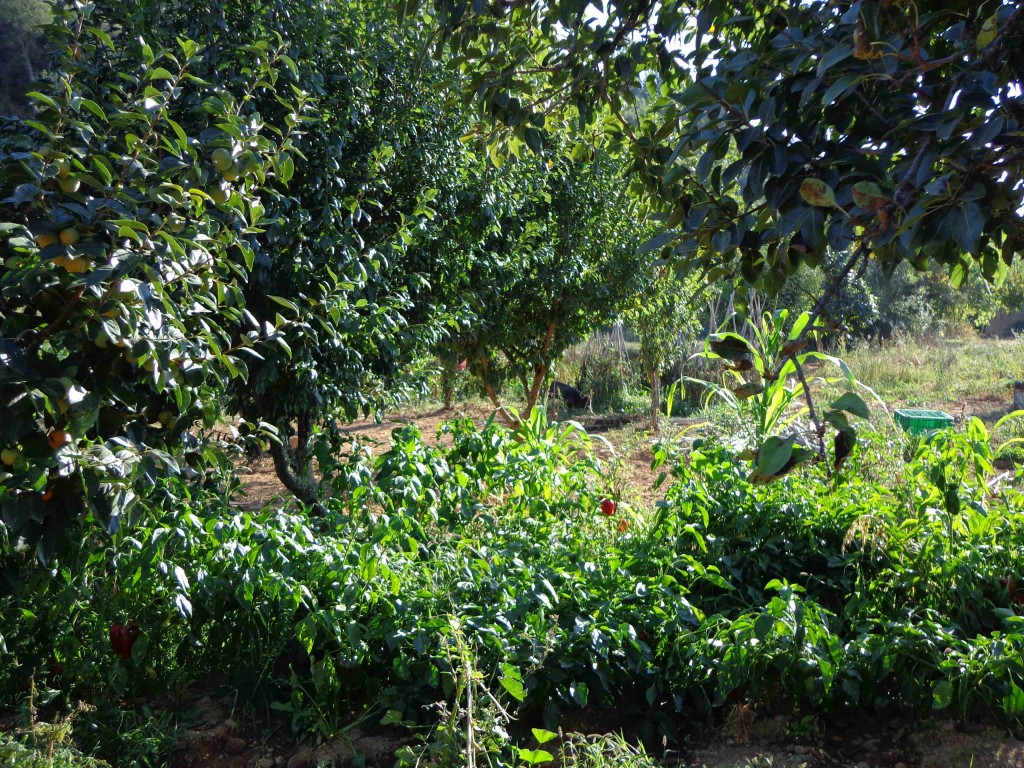 Pigs eat the waste and help fertilize the ground. The corn is actually grown mainly to feed the pigs  through the winter. (The pigs don’t seem that happy, they have a rope around one leg so they can’t move very far.) 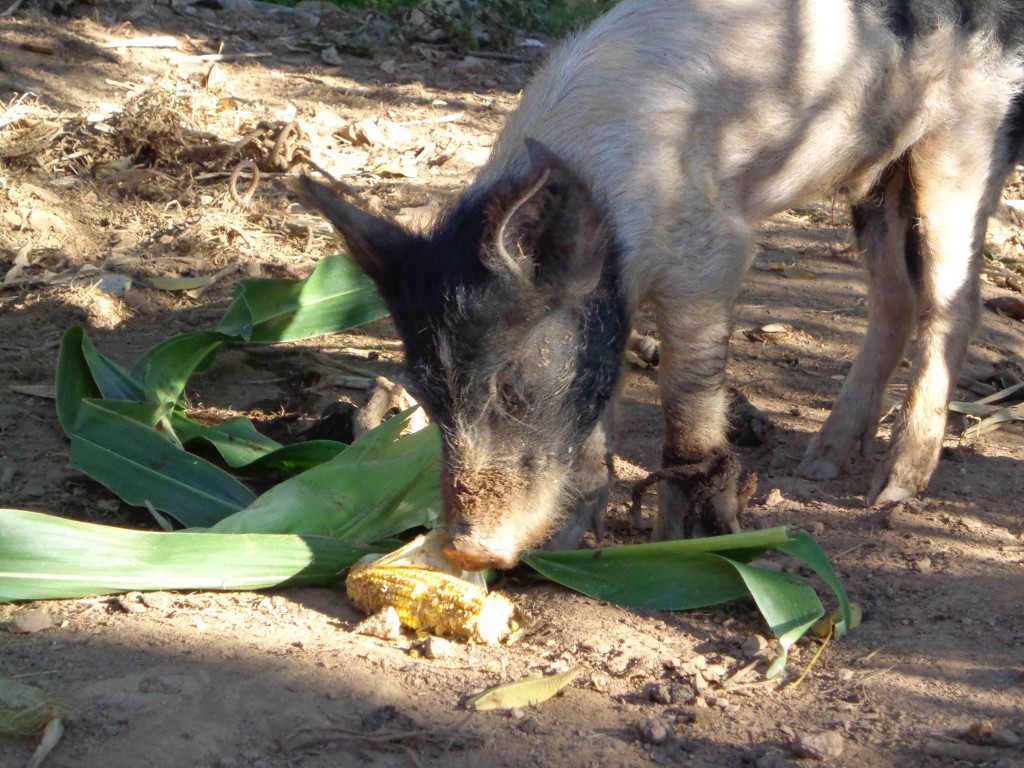 Then I discovered that this corn is GM… 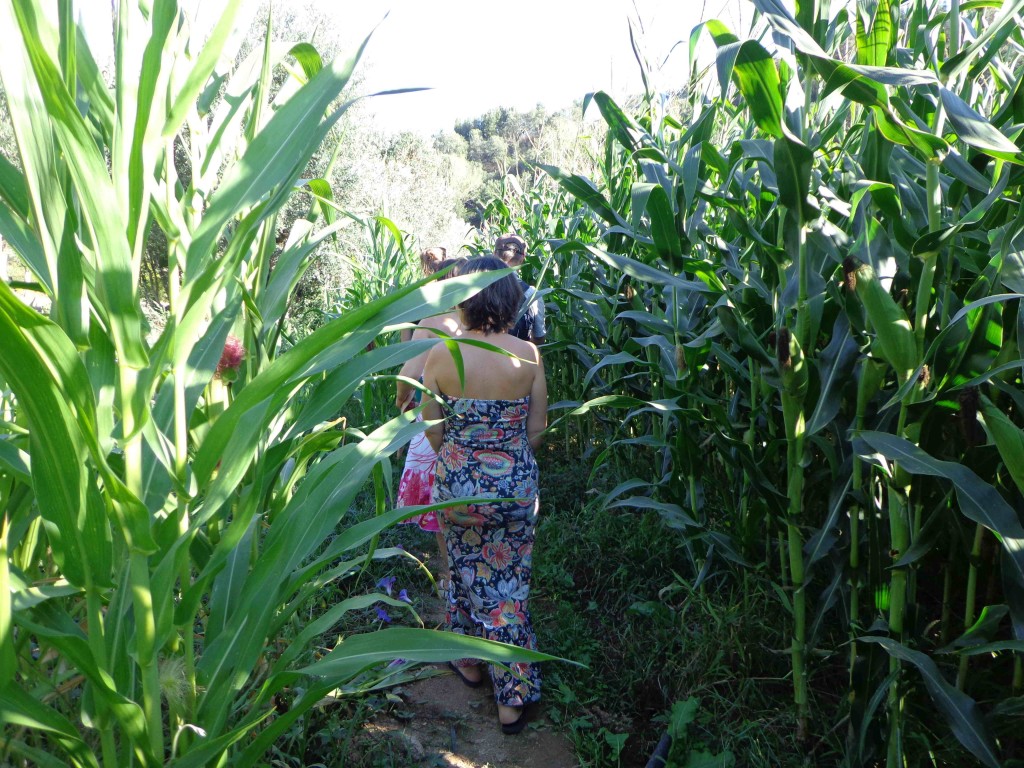 Apparently its hard to find corn seed that is not from Monsanto round here…. and it does produce these big yellow ears of corn. 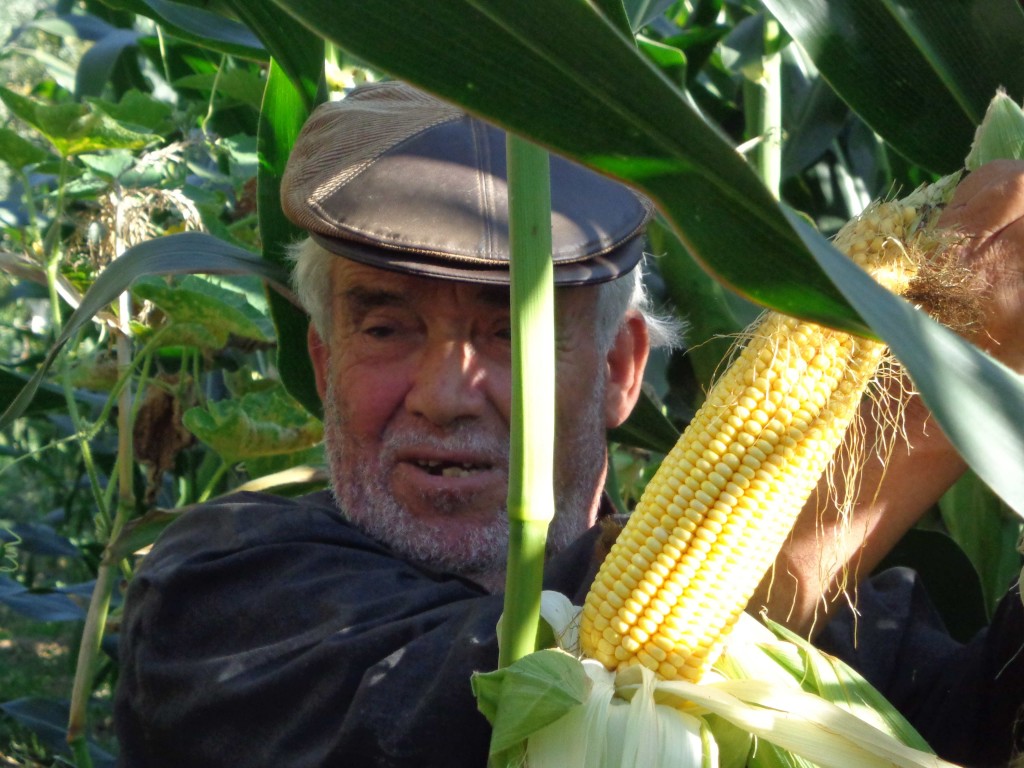 This one doesn’t look too good though – this is what happens if you try to do a second year of planting from seeds saved from GM corn……. 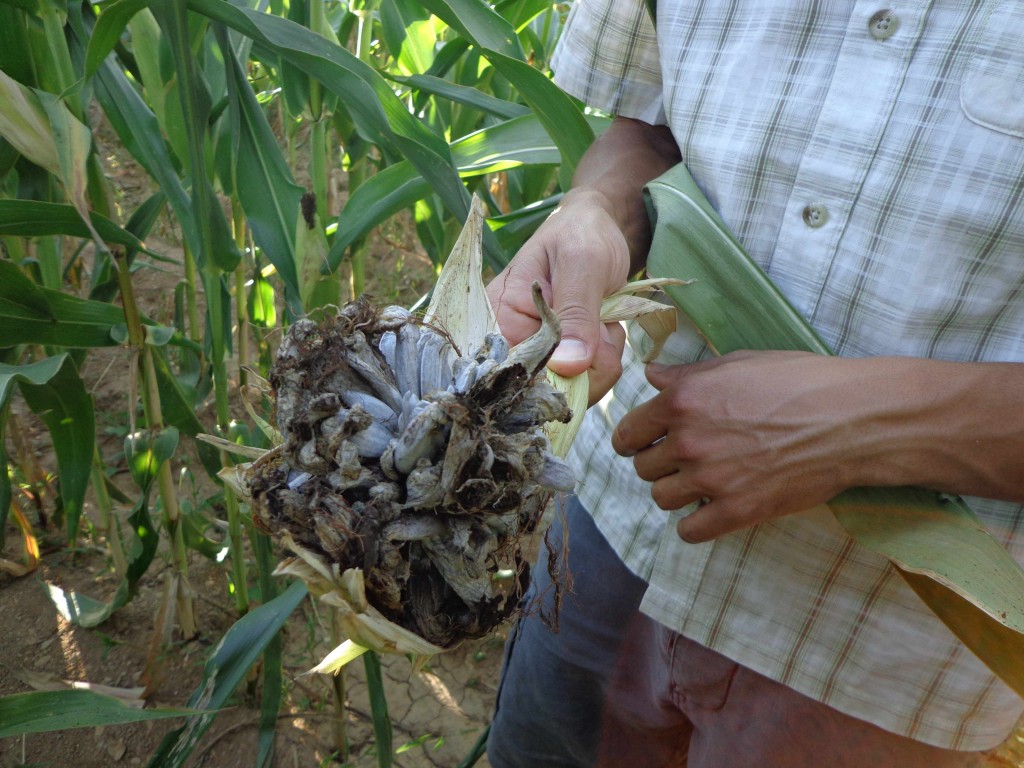 The thing with corn is that regular corn is often decimated by a pest. The Monsanto corn has a built in pesticide that it produces to combat this pest. However its only a matter of time before the pest becomes resistant to this pesticide. And in the meantime it is poisoning the bees, the pigs and other animals and humans that eat it. It is also impossible to then grow other corn within 10km radius without the likelihood that it is being cross-pollinated by bees and being genetically mutated.

I have done some research and discovered that the Portuguese are some of the most misinformed and ignorant in Europe about the dangers of GM seed . Likewise they will spray pesticides and use chemical fertilizers believing that they are like “vitamins” for the crops. These rural farmers are mostly uneducated and often can’t even read.

They are also living on a survival level economically, and will just go with whatever seems to make their life easier. 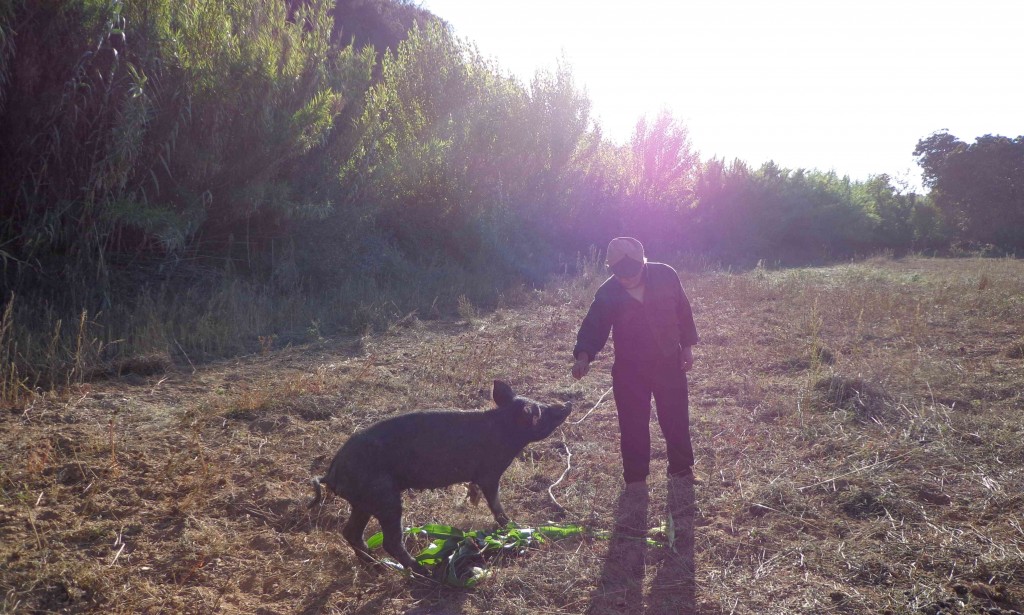 Hopefully the presence of the Centro de Convergência will help to educate by showing an alternative. Already there are small permaculture gardens being formed, and a children’s garden project which will be teaching the children hands-on organic growing.

As an outsider, the strategy of arriving and telling people they are doing things wrong and that I know a better way, is likely to be perceived as arrogant, and result in conflict rather than positive change. However,  I am already researching and plotting ways to encourage villagers to choose organic corn, and use alternative ways to manage pests (of which there are many).

Likewise we hope to experiment on the land with viable alternatives to the eucalyptus mono-culture which is so prevalent around here, and also so destructive. Mono-cultures generally are not healthy ecosystems. Eucalyptus is a particularly unhealthy one, in that it sucks up huge amounts of groundwater with its deep and strong roots (leading to streams and springs drying up), it also prevents other plants from growing in its shade, and it is a big fire risk. In Portugal there is a history of corruption associated with the eucalyptus industry, its a big story that I won’t go into here.

Part of a recently harvested eucalyptus plantation, the harvested trees will most likely turn into toilet paper: 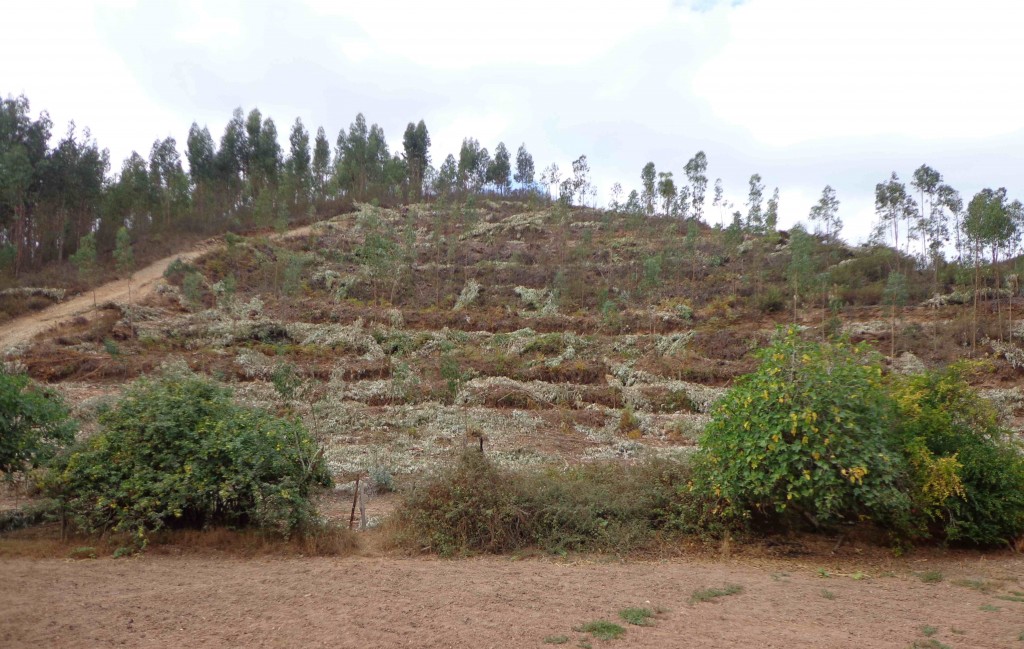 So these are some of the more challenging aspects of my new neighbourhood, however my impression of the people of this village is of a basic goodness, humility and friendliness. These will be my neighbours, and in spite of our differences, I hope to be able to find points of interaction, mutual exchange and recognition of our common humanity.

View over the village towards the hills where my new home is located: 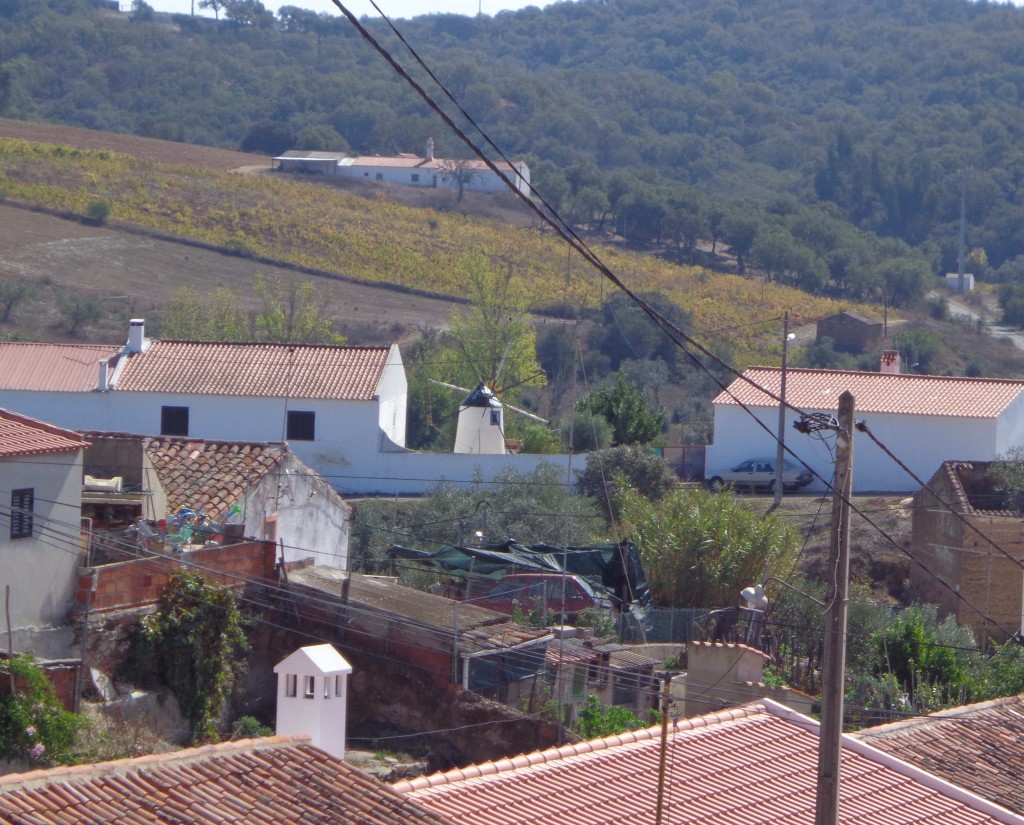 For more information about this village here are two websites (in Portuguese), with more videos and photos: (http://centrodeconvergencia.wordpress.com/ and http://aldeiasustentavel.net/site/.)

I also found this in English, from the European Voluntary Service site: http://ec.europa.eu/youth/evs/aod/hei_form_en.cfm?EID=60000210701